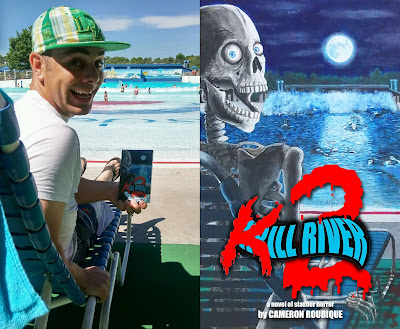 I was very lucky this year to have not just Kill River, but also Kill River 2 selected for the Bloody Beach Read-Along. It's been a lot of fun seeing everyone's posts and getting to talk with a lot of cool new people who are just discovering my books for the first time. Last year I took a bunch of pictures at my local water park WaterWorld to share and show the real life spots that inspired Kill River 2, and I decided that it was time to get off my ass and post these.  Also, a new blog post is way past overdue.

Oh and SPOILER ALERT!!! There will be spoilers in this, so turn back now if you haven't read the book yet. Okay, so here goes. 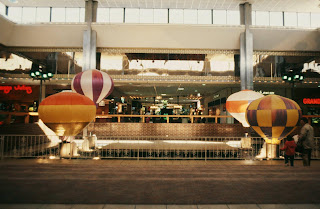 One thing I loved about KR2 was that I got to go even deeper into the 80s with the scene at the school dance and the scenes at the mall. For the Westview Mall in the book I pictured the old Westminster Mall in Westminster, Colorado where I grew up. Sadly, the Westminster Mall was torn down about five years ago, but I managed to find this picture of the centerpiece hot air balloons that are briefly mentioned. Also in the background on the left you can see the Orange Julius where I pictured Cyndi filling out a job application. 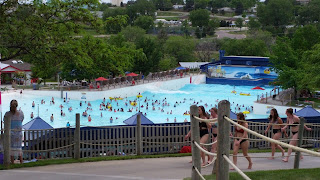 Unlike the water park in the first book—which is kind of a hybrid inspiration of both WaterWorld and Schlitterbahn, the park in KR2 is all WaterWorld. I really wanted to just have fun weaving a typical day at the water park into my story, and since I always have a great time there, writing this story kind of felt like escaping to the water park every day. One of the first new things Cyndi sees is the wave pool from up on the hill, and this is the same view I see every time I walk into Water World. 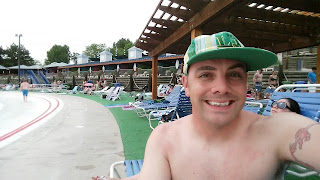 I post lots of pictures of the wave pool area, and you get the idea, but I thought I'd show a little of the beach. This is the spot where poor Eddie dies. A few years ago they built these pergola things right where that scene takes place, but it used to be wide open. They do stack the chairs up along the edge of the wave pool at the end of every day, but for my story I had them all stacked here so they kind of resembled a hedge maze. 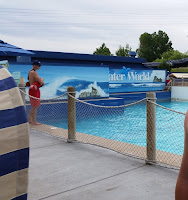 Also here's a closer shot of the deep end of the wave pool and the little walkway that plays a huge part in Brady's death and the big fight scene near the end between Cyndi, Johnny, and the killer.  For the story, I pictured it as solid straight wall instead of the zig-zag shape it really is.  I've never had the privilege of walking across this walkway unfortunately, and I have no idea how the wave machinery works in real life. The control panel and the grates at the bottom of the back wall of the wave pool were totally made up for the story. There's also a smaller wave pool up near the main entrance, and there used to be a fake shark hanging near the back wall in that pool, but that area is for little kids now and I haven't seen the shark in a long time. 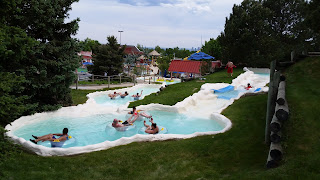 The Rocky River is a ride that's loosely based on a real life ride called Tortuga Run. Here you can see it winding around down to the bottom. The Tortuga Run is much slower and friendlier than the Rocky River ride in the book, but it's one of those classic rides at WaterWorld that I love. I decided to add it in as Cyndi keeps noticing strange similarities between her experiences from KR1 and this new park. 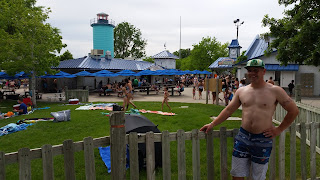 This is the picnic table area where the lifeguards have their party. Please ignore the chunky dude (me) in the foreground. I had to add myself in a few of these pictures so that people wouldn't think I was some creeper trying to take pictures of them. I originally planned on having a big crazy lifeguard massacre scene in this spot, but it just didn't really make much sense so I ended up not going in that direction. The scene where Cyndi comes back to the park and finds this area empty also takes place here. That scene was inspired by a nightmare that I had as a kid: my elementary school playground was a giant pool and I ran home to grab something to show my friends. When I returned at sunset, everyone had vanished. 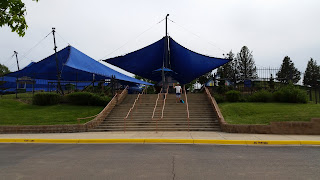 Possibly my favorite part of KR2 is the part where Cyndi returns to the park and finds everyone gone. Then she hauls ass out into the parking lot only to turn around and watch the killer wave at her as he shuts the gates. In this picture I'm standing in the exact spot where I imagined him to be, and am creepily waving just like he does.

I loved writing the character of Jennifer. She was a total bitch and setting her up for a fight with Cyndi and a crazy death was so much fun. Here you can see the parking lot where she flattens Johnny's tires, then senses the killer watching her from the pine trees up on the hill.  And also here is where the bronze Kaptain Smiley statue would be, in real life there's this statue of kids riding on an alligator, presumably just before he does a death roll and eats them.

And while we're on the topic of Jennifer, this is the Screaming Mimi, the inspiration for the Screamin' Demon. Way back when I was still living in the apartment and editing KR1, I came up with the idea for Jennifer's terrible death at the bottom of this crazy ride. I'm not the biggest fan of the Screaming Mimi. Whenever I ride it, the plastic sled thingys always hit the water at a weird angle and I end up getting hit in the head by them. 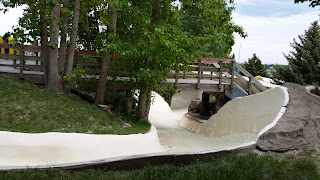 And finally, we reach the ride that inspired The Falls. Now it's called Pirates Plunge and the three slides are red and black, but years ago it was called the Bermuda Triangle and the slides were garden-hose-green and translucent. This is one of my favorite rides and I loved setting the final killer fight scene up in this high shack looking out over the parking lot and the other rides.

So that's about all I have for now.  I'm hoping to go out to Indian Tree Golf Course and film a video showing the real life locations that inspired my newest book Golf Curse.  Hopefully, I can get that done sometime within the next month before all the leaves start falling.  I'm hard at work writing Kill River 3 as of right now and I'm hoping that next summer it'll finally be finished and released. And not long after that I'll have a new batch of pictures to share with you. Thanks for checking out my Kill River books and for taking an interest in seeing what inspired some of the different scenes in Part 2.

Posted by Cameron Roubique at 7:05 PM

Cameron Roubique
Hi I'm Cameron and I wrote a book called Kill River. I love 80's slasher movies and hope to write a new batch of them, because like Jason Voorhees, 80's slashers will never die.